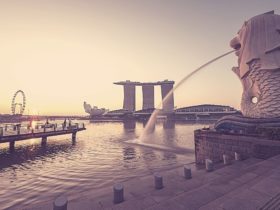 Singapore Tightens Rules On Crypto Service Providers In The Region

Popular American football quarterback Tom Brady has finally jumped in and responded to Ethereum co-founder Vitalik Buterin amidst the grand drama that unfolded on Twitter when Buterin uploaded several screenshots of tweets criticizing his appearance on social media.

Buterin, who recently appeared on Time Magazine’s cover page had received severe criticism based on his looks, which compelled the Ethereum co-founder to upload screenshots of the brutal tweets on popular social media platform Twitter.

In one of those tweets, a user compared Buterin to Tom Brady, stating that he looks like a “dystopian version” of the former quarterback. Several Twitter users also correlated Buterin’s appearance to Brady, drawing outrageous parallels and asserting that Buterin looks as if Brady did meth.

Later on, Vitalik Buterin took to Twitter to upload the criticizing tweets, in which Ethereum’s co-founder humorously asserted that he thought Tom Brady was Tom Cruise, a famous Hollywood actor of the Mission Impossible franchise.

Tom Brady, who in reality is a famous American football quarterback, responded to Buterin, claiming that he is a great fan of Buterin’s work. The footballer later went ahead and stated how he was inspired by Buterin’s work on Ethereum and created “Autograph,” his independent NFT platform. Brady also thanked Buterin for his contribution to the cryptocurrency industry.

Brady’s tweet soon went viral after it was posted on Twitter, garnering nearly 82.2K likes and 7957 retweets at the time of publishing. Buterin also thanked Brady for his “kind support.”

The online exchange between Brady and Buterin attracted mixed reviews on the internet with some of the users accusing Brady of using crypto as a tool to get richer. In contrast to this, some users were also seen appreciating Brady for addressing the issue with such grace and class.