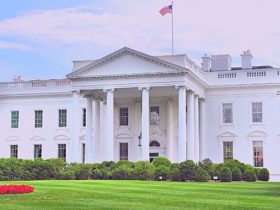 This year, the cryptocurrency community welcomed a flock of traditional investors who channeled a large part of their assets into Bitcoin. This boosted the market sentiments as a reassurance that mass adoption is already in motion. This year will go on to close as one of Bitcoin’s most fruitful year, in the context of influencing billionaires and major players in the fiat world, as Larry Fink, the CEO of BlackRock acknowledged the significance of Bitcoin and the impact that the leading cryptocurrency could have in the traditional market.

First reported by CNBC, the CEO of BlackRock – the firm which currently hosts assets valued at a whopping $7.4 trillion – is certain that Bitcoin has put on a show for the whole world, “Bitcoin has caught the attention and the imagination of many people,” he said in a conversation with Mark Carney, the former Governor of the bank of England at the Council of Foreign Relations on Tuesday.

He also added that Bitcoin is “still untested, pretty small market, relative to other markets. Bitcoin is seeing big giant moves every day, but it’s a thin market. Can it evolve into a global market? Possibly.”

This is a big deal for the cryptocurrency market and will be received as a massive endorsement for Bitcoin. If company’s sitting on billions of dollars are paying attention to Bitcoin, then this is an affirmation of previous speculations from analysts and commentators in the community, most of whom have opined that bigger players will be trailing the market in the coming years. This reflects a recent report, detailing a comment from Jason Yanowitz, who predicted that following the entrance of PayPal into the industry, leading fintech companies like Facebook and Google will follow suit.

Bitcoin as a global asset has also sparked debate in the community. Regulatory bodies cracking down on exchanges and tampering with transparency has been an issue of concern in the market for years. But Fink’s comments could be a hopeful pointer to a future where regulatory policies are cross-checked and remodeled to allow Bitcoin and the general cryptocurrency market to thrive on a global scale.

Meanwhile, the CEO also raised a point concerning Bitcoin’s impact on the United States’ Dollars. The year to date performance of the USD shows a 5.38% decline. The relevance of the USD is slowly reducing according to market statistics, and Fink confirmed that this is indeed the case. But the receiving party may not be the United States as Fink notes, but international holders of dollar-based assets. Throwing a final question at the public, the CEO ponders on a question that many industry players have been wrestling with; “Does Bitcoin change the need for dollars as a reserve currency?”